Our advisory board members for the symposium 2014 are listed below. They represent different surgical specializations with special interest in surgery in low resource countries.

Advisory board members have the role to advice the organization to get the most needed subjects and the best international speakers in Amsterdam for the symposium. They are our special hosts for the international visitors during the event and they will moderate sessions during the actual conference.

Prof. Dr. H.A. Heij is pediatric surgeon and head of the Paediatric Surgical Center in Amsterdam.  He worked in Zambia as a general medical officer before specializing in Surgery in the Netherlands. From 1995 to 1999 he returned to Africa as medical superintendent and consultant surgeon.  Professor Heij has been President of the Netherlands Association of Paediatric Surgeons. He maintains active links with several centers in the low resource settings and is a Founding Fellow of the College of Surgeons of East, Southern and Central Africa.

Prof. Dr. R.P. Bleichrodt  is general surgeon and became professor in abdominal surgery in Radbout UMC Nijmegen (Netherlands) in 2000. He is very education minded and has been involved in training surgical residents and tropical doctors for many years. Furthermore he developed important parts of the training program for residents in surgery in the Netherlands. In 2012 Prof. Bleichrodt moved to Zambia where he is currently working at St. Francis Hospital in Katete. Again he is responsiple for the training of clinical officers, surgical residents and tropical doctors from both Zambia and the  Netherlands.

Prof. Dr. W. Wisselink is chief of the division of vascular surgery at VUMC in Amsterdam. He studied medicine in the Netherlands and specialized in vascular surgery in the United States. Professor Wisselink is based in Amsterdam now but also adjunct-professor at the university of Illinois at Chicago. He was President of the Dutch Society for Vascular Surgery from 2008 until 2012. He is currently involved in the doctor-to-doctor program to teach vascular surgery procedures in MOI Teaching and Referral Hospital in Eldoret, Kenia.

Dr. H.A.H Winters is plastic surgeon at VUMC in Amsterdam. After medical school he became general surgeon followed by specialization in plastic, reconstructive and hand surgery. He is an expert in complex reconstructive surgery for bone defects with vascularized bone grafts.  Dr. Winters is member of the board of Dutch Society for Plastic Surgery and head of the teaching program for residents plastic surgery in VUMC Amsterdam. He has been on several missions to low resource countries with organisations like the Noma Stichting, Interplast and Sante Pour Tous to train and assist doctors over the past years.

Dr. T. Schlosser is an orthopedic surgeon, retired in the Netherlands but highly active in low and middle income countries. He is chairman of the Working Group Orthopedics Overseas of the Dutch Orthopaedic Society (NOV), chairman of the Dutch Foundation Orthopedics Overseas (DFOO) and chairman Working Group Tropical Orthopedics and Traumatology of the Netherlands Society for Tropical Medicine and International Health (NVTG). Dr. Schlosser is treasurer of the World Orthopedic Concern.

Dr. J. Stekelenburg is president of the Working Party on International Safe Motherhood & Reproductive Health, is based as a gynaecologist in Leeuwarden (the Netherlands). From 1997 to 2001 he worked as a Medical Superintendent for Kalabo District Hospital in Zambia. He spent much time in advising the District Health Management Team. Additional duties, such as coaching Zambian students and Dutch medical students in their field research, completed the diverse scala of his experiences during those years. 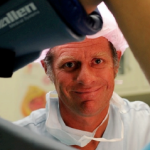 In 2004 he successfully defended his thesis, titled ‘Health care seeking behaviour and utilisation of health services in Kalabo District, Zambia’ at the Vrije Universiteit of Amsterdam (Promotor: Prof. Dr. I.N. Wolffers, Co-promotor: Prof. Dr. J.J.M. van Roosmalen). As president of the Safe Motherhood group he is focused on his mission of helping to provide access to high quality essential reproductive health services to all women worldwide, has organised several international conferences and set up a Twinning project with the Tanzanian association of gynaecologists and obstetricians (AGOTA). Since 2001 he has been invited to teach Safe Motherhood topics in the Master programme in International Health at the Royal Tropical Institute/Vrije Universiteit in Amsterdam and other courses at the Vrije Universiteit. Besides training he supervises several PhD students with their research on a Safe motherhood topic.